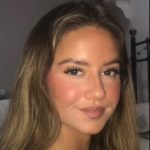 Gabriella (aged 17) started playing violin at the age of four as a pupil of Claudio Forcada, a Suzuki teacher based in North London. She currently attends Dame Alice Owen’s School in Potters Bar where she benefits from an outstanding Music Department led by Katherine Bamber with specialist support from James Widden, Head of Strings.

In 2014 Gabriella won a place at the Royal College of Music Junior Department where she studied under Eri Konii for several years before more recently becoming a pupil of Professor Ani Schnarch. During her time at the Junior Department she has been Leader of its Sinfonia Orchestra and last year achieved 1st Prize as a soloist in the faculty’s Gordon Turner competition; more recently she was selected to be Leader of the flagship Symphony Orchestra.

Gabriella has also been involved with various other youth orchestras as part of her musical education: she was previously Leader of the National Children’s Orchestra of Great Britain for two consecutive years in 2016 & 2017, winning a Leverhulme Trust Scholarship on both occasions, and then subsequently became a member of the National Youth Orchestra of Great Britain with whom she was recently selected to be Leader in 2022.

Gabriella has played regularly with Enfield Youth Symphony Orchestra over several years and has been a member of the English Schools’ Orchestra. In addition she participates in other musical activities, playing with the charity Music in Secondary Schools Trust (MiSST) with whom she has had the privilege of performing in a masterclass with renowned violinist Nicola Benedetti and also plays to the elderly residents of a local nursing home close to London.

Gabriella has won several competitions as a soloist, including the Recital and Concerto classes at both the North London Festival of Music and Stratford & East London Music Festival; she was also the winner of Enfield Music Service Concerto Competition in 2018 when she was subsequently selected to perform Mozart’s Violin Concerto No 4 aged just 13 with Enfield Chamber Orchestra.

In December last year Gabriella was chosen to play as soloist with Enfield Youth Symphony Orchestra in a performance of Max Bruch’s Violin Concerto No 1 in D Minor in a special Christmas concert at St Giles Cripplegate Church in central London.

Gabriella is very grateful to violin dealer Florian Leonhard for the loan of the violin she is playing today.