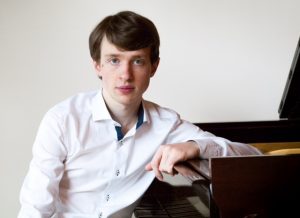 As a teenager, Julian won laureates and prizes at international piano competitions in England, France, Germany, and Belgium.  He now has a busy European concert schedule.  Recent recitals have included performances of Beethoven’s Diabelli variations in London and Munich; and works by Schumann and Mozart at Vienna’s Musikverein at the invitation of Menahem Pressler.

His repertoire includes more than twenty concertos; he gave the first Russian performance of the Concertino for piano and orchestra by Lucas Debargue in Moscow in December 2018, and in 2017 played Bartók’s third concerto in the main concert hall in Budapest.  His future programme includes Howard Blake’s piano concerto in November and January, and Brahms piano concerto no. 1 with Cambridge Symphony Orchestra in March 2020.

In 2016 he was awarded an Or du Rhin Foundation scholarship to study with Rena Shereshevskaya at Ecole Normale de Musique, Paris. He composes, plays the violin and enjoys acting.

For tonight’s performance, Julian will be playing the final version of the concerto that was published during Tchaikovsky’s lifetime, in 1879.  The version everyone knows, and plays, was published after his death.  It includes many unauthorised editorial changes by the famous Russian pianist Siloti.  Julian feels that these diminish the musical coherence of the work.  One prominent difference between the two versions is that the huge piano chords at the beginning are replaced by arpeggios.  Overall this version is less outwardly bombastic, and more heartfelt.