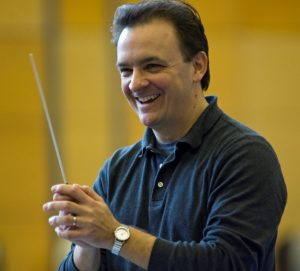 Lev Parikian is much in demand as Guest Conductor with orchestras throughout Britain. He is Principal Conductor of several London-based orchestras, and the City of Oxford Orchestra. He is also Artistic Director of the Rehearsal Orchestra. He has worked extensively with students and youth orchestras, including the Royal Holloway University of London, where he also taught conducting for many years. Lev conducted the BBC Concert Orchestra in a rerecording of the theme tune for Hancock’s Half Hour for The Missing Hancocks on BBC Radio 4.

Lev studied conducting privately with Michael Rose and David Parry, and at the Canford Summer School with George Hurst. He then pursued his studies at the St. Petersburg Conservatoire with the great Russian teacher Ilya Musin.

Lev is also active as a writer. His first book, Waving, Not Drowning, was described as ‘a must-read’ by Classical Music magazine, while the Times Literary Supplement called his second, Why Do Birds Suddenly Disappear?: ‘good-hearted and well made, funny and clever.’ Books 3 & 4 are in the pipeline.

Lev lives in South London (someone has to) and his hobbies include resetting the WiFi, arguing with self-checkout machines and profreading.