Return to About Us

Hertfordshire Philharmonia was formed in 1994 by a group of amateur musicians who wished to make orchestral music of the highest standard together. Since then, the orchestra has grown to comprise a group of some hundred musicians who, between them, perform around 6 concerts annually, in a variety of venues throughout Hertfordshire. The orchestra represents the best of Hertfordshire, and draws its players and audiences from all over the County and beyond. 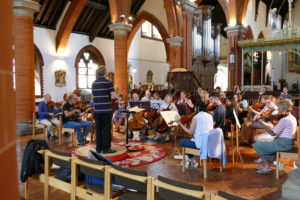 The Hertfordshire Philharmonia is proud to be a self-governing, independent orchestra, receiving no grants, whose concert programme and choice of conductor are debated and decided by its members. The orchestra has no musical directors, but instead enjoys the challenge and inspiration of hiring and working with a different conductor for each concert.

Visit our Conductors page to find out more about some of those whom we have asked back.

In addition to our own concert season, we will also play for other organisations. We have been hired to play for ‘film music spectacular’ concerts, for fundraising concerts, at outdoor fireworks concerts, and to accompany choirs at their concerts. If you are a choir, or a large-events organiser, or just happen to need a large (or medium, or small) orchestra, please contact the Secretary to discuss your requirements.