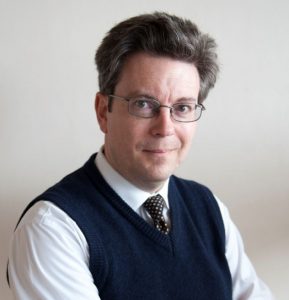 Martin Smith was an Exhibitioner at the Royal College of Music Junior Department and a scholarship winner at the Royal Academy of Music, where he studied violin and conducting.

Martin has been active as a professional violinist for many years. He began as a member of the Duke String Quartet, with whom he appeared throughout Britain and Europe, and he has also appeared with the Allegri and Bridge Quartets. He currently performs with the Ellerdale Piano Trio, which he founded in 1992, the Cirrus String Quartet and the Primavera Ensemble. Martin works with many of the country’s foremost chamber orchestras, such as the Academy of St Martin in the Fields and the English Chamber Orchestra; he has been a member of the London Mozart Players for many years, and is currently one of the Directors of the orchestra. He also leads New London Sinfonia and Orchestra Nova, and has appeared as guest leader with the City of Birmingham Symphony Orchestra, Guildford Philharmonic Orchestra, Brunel Ensemble and London Concertante. With Orchestra Nova he has led many premières and première recordings of music by British composers. He has made solo appearances around the UK and in France, Germany, Holland and the United States, many as leader of the London Soloists Chamber Orchestra, which he led and directed for over ten years.

In recent years Martin has returned to conducting, buoyed by success in concerts for the London Mozart Players and London Soloists Chamber Orchestra in 2007. He conducted the LMP most recently in 2015, and has led orchestral workshops for them and for the European String Teachers’ Association. Since 2008 he has been Artistic Director of Enfield Chamber Orchestra, and he has also worked with West London Sinfonia and the Southgate and Bushey Symphony Orchestras. In 2016 he was appointed Artistic Director of the Richmond Orchestra.

Martin’s hobbies include Roman roads, the outdoors in general, and the avoidance of housework. He lives in St. Albans with his solicitor wife Margaret, and hopes one day to understand his daughters.